A life guard calls to swimmers at a beach in Miami on March 5, 2021. Amid fears of fueling a new surge in virus cases, the city of Miami Beach on Saturday announced an abrupt curfew to curb swelling crowds of spring breakers. 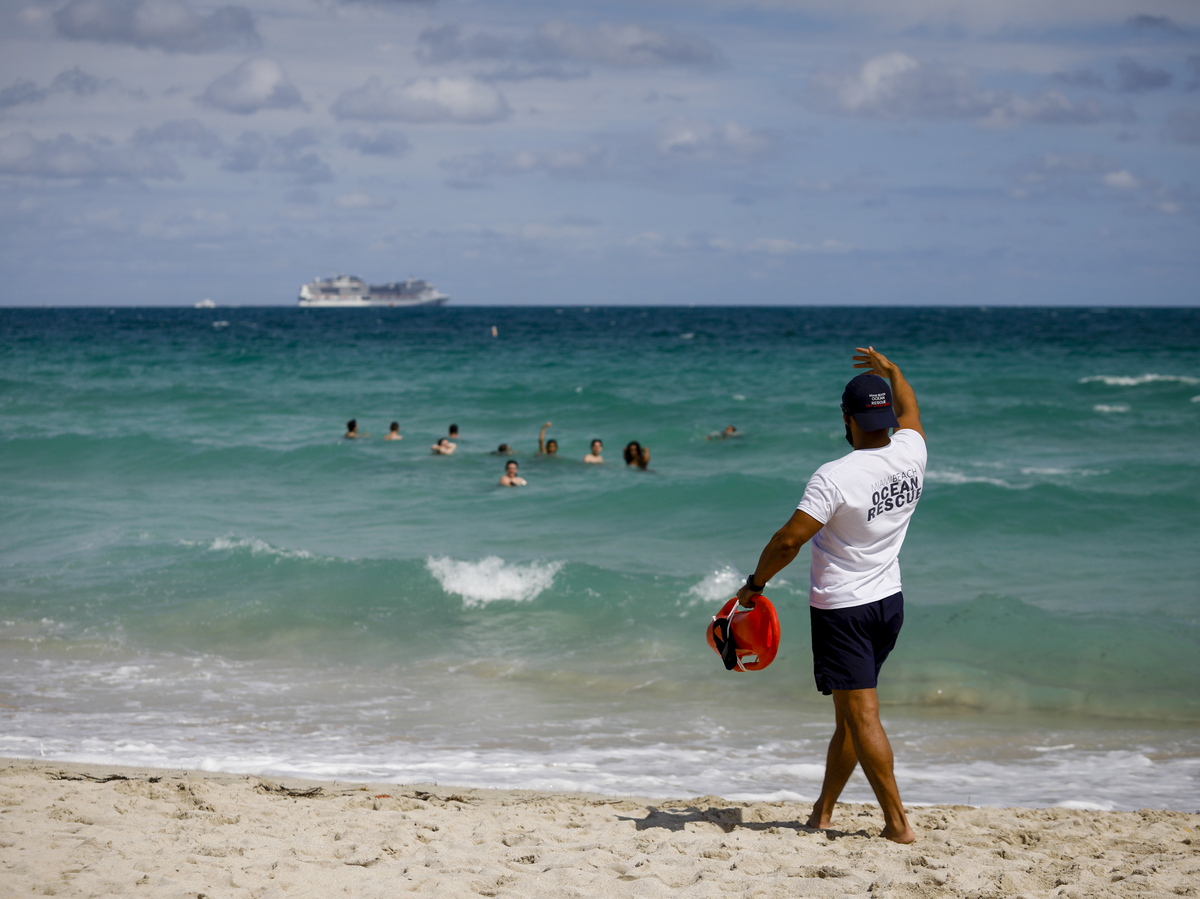 A life guard calls to swimmers at a beach in Miami on March 5, 2021. Amid fears of fueling a new surge in virus cases, the city of Miami Beach on Saturday announced an abrupt curfew to curb swelling crowds of spring breakers.

For anyone looking forward to the annual frivolity of spring break or the diversion offered every year by March Madness, the pandemic is once again reminding, not so fast.

Just as tens of thousands of revelers were dreaming of dancing the night away in Miami Beach on Saturday, the city abruptly declared a state of emergency. Local officials shutdown traffic on the causeways leading into the beach mecca, ordered outdoor restaurants to suspend outdoor dining starting at 7 p.m. and banned strolling on the city’s iconic Ocean Drive after 8 p.m. The announcement came after cheap flights, discounted hotel rooms and new rules rolling back state-mandated COVID-19 restrictions led to a surge of visitors into Miami Beach and other Florida hotspots just as U.S. colleges pause for spring break.

“Too many people are coming here right now,” Miami Beach Mayor Dan Gelber said on Saturday as he proclaimed the state of emergency.

“And too many people are coming here with bad intentions,” Gelber said about large crowds that trashed outdoor seating areas at several restaurants on Friday night in the Art Deco section of the city adjacent to the beach.

“At night there is no question that it becomes a place that feels a little out of control or a lot out of control,” the mayor said as he announced the 72 hour lockdown. “At times you see things that shouldn’t happen and no community should have to endure.”

Gelber said he was imposing the 8 p.m. curfew and entry restrictions into Miami Beach preemptively before things get worse. Videos of the area show dense crowds of revelers, many of them maskless, drinking, dancing and ambling along Ocean Drive on Saturday night before police moved in to disperse them.

Police say they arrested “at least a dozen” people for violating the state of emergency on Saturday night. This is actually fewer arrests than last week, when Miami Beach police detained nearly 100 people as cops tried to breakup spring break crowds.

As in much of the country, COVID-19 numbers in Florida have dropped from a peak in January, but that previous nationwide surge followed soon after the Christmas and New Year’s holidays. Public health officials are now warning that gatherings for spring break and the upcoming Easter holiday could again amplify coronavirus transmission as pandemic-fatigue prompts people to let their guard down.

“Every time there’s a surge in travel, we have a surge in cases in this country,” the head of the Centers for Disease Control and Prevention Rochelle Walensky said earlier this month. “We are really trying to restrain travel at this current period of time.”

Dr. Francis Collins, director of the National Institutes of Health, echoed that sentiment in an interview with NPR’s Mary Louise Kelly earlier this month. Collins said Americans need to be patient and continue with masks and social distancing for a bit longer.

“We have been on a marathon since this all started a year ago. And, you know, when you’re running a marathon, you don’t want to stop at the 24th mile,” Collins said.

“Everybody is incredibly frustrated and tired of all of this, we just have to stick it out here for a few more weeks and months to make sure that we get to that finish line in a way that saves the maximum number of lives.”

In another disruption to the national rites of spring, the pandemic blew out some March Madness brackets over the weekend. In the NCAA men’s basketball tournament, a surreal score line of 1-0 popped up on tracking apps for the game between Virginia Commonwealth University versus Oregon. VCU was forced to pull out of the event after reporting multiple positive COVID-19 tests.

“This has been a crazy couple of days and the last 6 hours has just been heartbreaking,” VCU coach Mike Rhoades said on a videoconference Saturday night announcing his team’s withdrawal from the tournament.

Rhoades said there were “no dry eyes” when he told his players the news.

“This is what you dream of as a college player and a coach, and to get it taken away like this is just a heartbreaking moment in their young lives.”

But Rhoades added that all his squad did was lose a basketball game, while “500,000 people have lost their lives.”