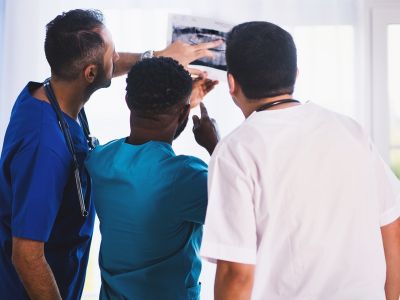 Physicians in the Netherlands believe they have found a fourth pair of large salivary glands in the space where the nasal cavity meets the throat, according to a study in Radiotherapy and Oncology.

Researchers examined scans from 100 patients with prostate or urethral gland cancer, two human cadavers, and data on the effect of radiotherapy on salivation and swallowing from 723 head-neck cancer patients.

The results may indicate a fourth type of salivary glands, the first identification of its kind in nearly 300 years. Modern anatomy books show just three major types of salivary glands — one set near the ears, another under the jaw and another beneath the tongue.

The potential fourth set requires sensitive imaging to detect, said Dr. Wouter Vogel, radiation oncologist at Amsterdam-based Netherlands Cancer Institute and a study author, according to The New York Times. The body’s other large salivary glands can be felt, which is less feasible for the fourth pair tucked under the base of the skull, Dr. Vogel said.

The new find may explain why people receiving radiation therapy for neck or head cancer so often end up with chronic dry mouth and swallowing problems, according to Dr. Vogel. No one has tried to spare the unknown glands from radiation.

Alvand Hassankhani, MD, a radiologist at Philadelphia-based University of Pennsylvania, said he was hesitant to label the finding as “new organs.” In addition to the three pairs of known large salivary glands, minor salivary glands are sprinkled across the lining of the mouth and throat. The researchers may have just found a better way to detect a set of underappreciated minor glands, Dr. Hassankhani said.

The study examined a limited patient population, said Valerie Fitzhugh, MD, a pathologist at Newark, N.J.-based Rutgers University. However, she added, “If it’s real, it could change the way we look at disease in this region.”